For my birthday, Aaron brought me to Bar Lupulus, a new gastropub in town. Apparently they are usually very busy, so I’m glad Aaron had made reservations. I’ve seen this name frequently on social media, so I was really excited to try it out.

They are located in Wellington West, between Westboro and Hingtonburg. As a matter of fact, they replaced a restaurant which I have previously blogged about.  You can easily find street parking along Wellington or its side streets. The ambience is quite chic with a large bar, humungous, digitized rotating taps menu overlying a exposed bricks backdrop. Cool fact: I later learned that the name Lupulus likely originated from the scientific name for the common hops used in brewing – humulus lupulus; hence, the hop symbols on the window! Neat!

Usually this part of my post is not too elaborate but this is really where Bar Lupulus shines, with 20 craft beers on tap. This changes frequently so check their ginormous digitized menu by the bar or their website. I was impressed by their beer menu online as it provided direct links to the beer’s profiles on UnTappd – a social media app for beer lovers where you can share and review beers. If you want to see what I’ve been drinking, you can add me as a friend @ Bowsing Nom Noms. As IPA addicts, Aaron and I decided to share a few sampler-sized IPAs. We had one of each of the 4 IPAs they had on tap – Collective Arts’s Life in the Clouds, Indie Alehouse X Dominion City’s Hazer Quest, High Road Brewing’s Bronan and Blood Brothers Brewing’s Shumei IPA. My favourite would have to the Life in the Clouds – a hazy, hoppy, juicy New England IPA which I have found to be my favourite subtype of IPA. It was so good, I had to order a full-sized glass of it later.

For food, we started with the burrata. This “salad” is basically a large chunk of burrata cheese covered with aerated honey. This is paired with heirloom tomato, cucumber, grilled peaches, and brown butter croutons, which are decorated with their unique basil jello. The combination of tastes profiles and textures are unbelievable. And it looks beautiful!

For his main, Aaron had a fully-loaded pasta dish. Their pappardelle is served with smoked confit rabbit leg, wheat grass, cherry tomato, manchego (cheese), sorrel, atlas carrots (super cute tiny carrots) and bell peppers. An mysterious orange sauce coats all of this goodness and brings the whole dish together.

I had the Manzo – the most tender and succulent beef cheek I’ve ever bit into. It was served with pillowy gnocchi, salsify, new potato, beet and habanero puree and pistachio chimichurri. This was again an interesting combination of textures and I’m really impressed with Bar Lupulus’ use of unique ingredients like salsify.

The food was all gorgeously plated, but portions were not large. So we also ordered the charcuterie board selecting the duck prosciutto, the Louis Cyr cheese (hard, cow) and a soft cow cheese. They were all delicious choices. FYI, their charcuterie menu changes depending on what is seasonal. 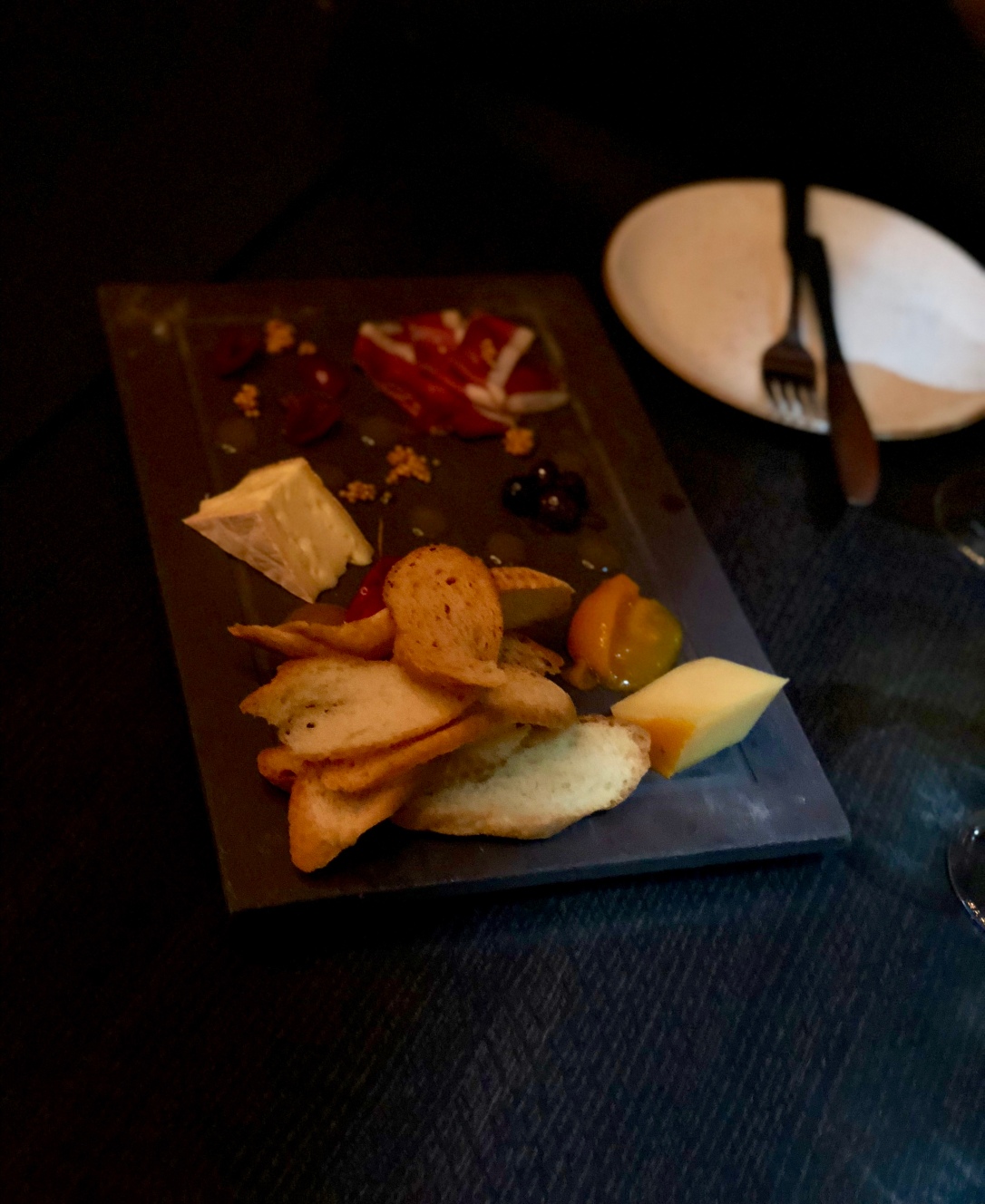 For dessert, we had the cheesecake, which was prepared and presented in a very unique way. The cheese part is blended into a light and airy cream and this was served on top of a mono-cotti. Fun food fact: apparently biscotti are baked twice – once as a log and again after it has been cut. So when it is only baked once, it is called a mono-cotti! This dessert wasn’t too heavy and was just the right size. I paired this with a cappuccino and it was a match made in heaven.

Our servers were attentive and checked back on us regularly. They were knowledgeable about their beer list and food options. They took note of Aaron’s comment during the reservation and were very kind to gift me with a complimentary dessert for my birthday (with a bonus candle for fun).

I was extremely impressed with my experience at Bar Lupulus. Sure, there are other restaurants in town with a wide-selection of craft beer, but the food is unfortunately usually lack-lustre. At Bar Lupulus you are able to enjoy some amazing craft beer along with a tasty, high quality meal. I will be sure to come back and have been recommending all my friends to do so as well, whether or not they like craft beer!

1 thought on “Bar Lupulus: Amazing Selection of Craft Beer and Excellent Food Under One Roof!”

This site uses Akismet to reduce spam. Learn how your comment data is processed.

Clams! Risked my life eating this. Taste like the ocean. Not my favourite. Enjoyed the rest of my seafood feast here though. See blog for details.
Noodles for days!!!
Found this hidden gem at the food court on the second floor of @imagoshoppingmall! Fried chicken with curry on rice! Delicious 🤤! See today’s blog post for details.
Fish, veggies, and rice - a staple home-cooked meal here in Malaysia. Day 17 post is up!
Grilled stingray, a staple when one visits a Malaysian hawker centre.
Boiled whole chicken and juicy satays!! My stomach is content ❤️